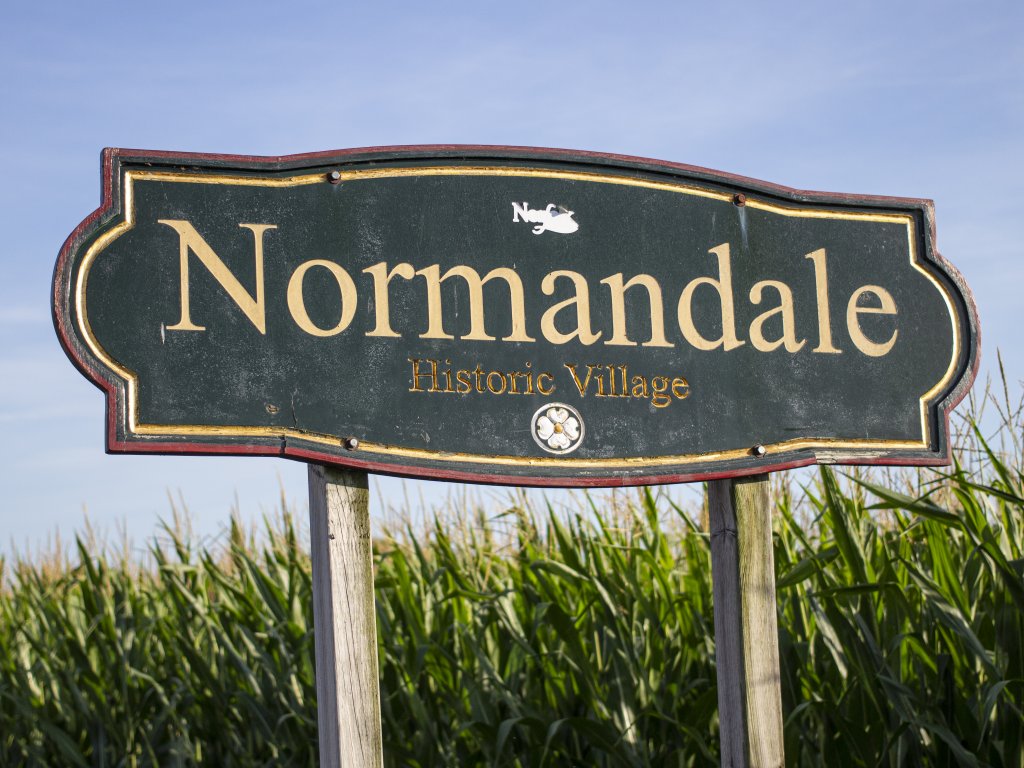 For the 9th Unusual Ontario Adventure (out of 160 I intend to check out!), my travels brought me to the nearly non-existent Normandale village. In fact, some would argue that Normandale is a veritable “ghost town”. While I don’t know of any hauntings, it earned its nickname due to a rapid reduction of residents after a short-lived boom in the 1800s. Today no more than 200-300 people live in Normandale.

Another noteworthy tidbit about this miniature town is its dibs on an Ontario “first”. It may be surprising, and is definitely contrary to popular belief, but Hamilton is not Ontario’s original steel town. Instead, this smaller than small town claimed that title in the early 19th century.

Normandale sits along the shores of Lake Erie in Norfolk County, Ontario’s Garden. At its peak in the mid- to late-19th century, between 400 and 750 residents called this little lakeside town home. An old gazetteer published in 1846 described Normandale as “having a population of 300. A thriving village with a post office, a tavern, one tailor and two shoemakers.” Today, a short drive through the town will reveal a few restored century homes and some small cottages dotting the quiet streets.

A nod to its historic roots as Ontario’s first steel town, the name Normandale refers to Ontario’s first iron furnace. The Van Norman Company was built in 1822. Thanks to the large peat bogs in the area, the Great Lake’s shores were the perfect location to manufacture iron. After burning in a furnace, bog ore transforms into iron, which can then be moulded into numerous useful items. The Van Norman Company produced the popular Van Norman cooking stove, iron kettles, other kitchen tools like pots and pans, and farming machinery.

Some time between 1816 and 1818, the English ironmaster John Mason emigrated to the Long Point Settlement. Here he met Noah Fairchild, a farmer and blacksmith, who informed him of the bogs. When Mason learned of the area’s resources, he quickly set up shop and purchased the land to start building the Long Point Furnace foundry. He was even able to secure the rights to mine the land’s resources, which were typically by the Crown.

Having already run and sold an iron manufacturing company in England, Mason was familiar with the iron industry. His timing couldn’t have been better either: he had zero competitors in all of Upper Canada. To top it off, the charcoal used for smelting was easy to access and inexpensive to obtain. Mason ended up building a small furnace beside Potter’s Creek, named after Samuel Long, the area’s potter, which feeds into Lake Erie.

However, things did not work out well for the abrasive entrepreneur. On Christmas Day in 1819, John Mason died. To make matters worse, his widow Elizabeth didn’t receive the legal papers for her husband’s unfinished foundry until almost a year later on November 11th, 1820.

Joseph Van Norman was born in 1796 in New Jersey to John and Sarah and was one of three boys. Later the family moved to Canandaigua, Ontario County, New York. Joseph’s father was an entrepreneur in the flour mill industry, which is where he learned from an early age how to build and grow a business.

On August 21st, 1821, 25-year old Joseph and two other partners purchased John Mason’s incomplete foundry. There was one catch: the sale’s completion was dependent on how successful the land’s resources proved. The contract granted Elizabeth Mason use of one of the houses on the property for 2 years and access to as much fuel as she needed, as well as much land as she could farm.

In addition to the foundry, Joseph Van Norman was a contractor. He built the Long Point Lighthouse in 1830 and laid plank roads connecting Port Dover, Hamilton, and Otterville between 1840 and 1848. After buying out all of his business partners at the foundry, including his brother Benjamin, he welcomed his eldest son Romaine (1819-1903) into the business.

In 1842 Joseph had a beautiful Regency cottage-style stone residence, complete with a cupola and wraparound porch and French doors built for Romaine. All of the windows are French doors; another feature unique to Regency homes for the purpose of integrating exterior views into the interior. The house is set back from the street on the 3.72 acre property and residents can enjoy Potter’s Creek running through. The cottage is unique to Normandale, but popular in other parts of Ontario. It is also one of the village’s few remaining visual reminders of its past.

The Van Norman’s Regency-style cottage home became the Guilers’ residence. Today it is known as the Van Norman-Guiler House and in January 1989 was declared a Historic Place by the Ontario Heritage Trust. If you follow Front Road out of town towards Turkey Point, you will drive past the house at 2318 Front Road.

Some time around 1863, Joseph moved to Tillsonburg where he lived with his daughter Mary Ann and her husband, one of George Tillson’s sons. Benjamin also had family ties to the Tillsons, marrying George’s eldest daughter Harriet. In 1888 Joseph Van Norman passed away. He is buried in Tillsonburg.

Joseph Van Norman and his partners, “King” Hiram Capron and George Tillson expanded the foundry and built a 30m-high brick chimney, water wheel, and a pair of bellows. King, an American immigrant, moved to the Forks of the Grand River to dive into the iron industry. There, he divided his land into town lots and later named it Paris (Ontario). In 1850 he became the first elected reeve (mayor). George Tillson arrived to Oxford County in 1825, purchased 600 acres of land around Big Otter Creek, and opened the Dereham Forge. Tillsonburg, Ontario was established in 1836, declared a police village in 1865, and became a town in 1872.

The men developed the foundry over a few years and opened for business in December of 1827. Unfortunately, during the first night of operation, the chief founder, David Bloss, was poisoned in his sleep by furnace gasses and other employees were injured. It closed for two months before reopening.

Thanks to the Van Norman Company, the area started to expand. Normandale was booming with about 400 citizens at its height and 200 men employed at the foundry. When the Welland Canal was built in 1829, the Toronto, Hamilton, and Montreal ports became much more accessible. From the 1840s-1850s, Romaine ran the foundry.

However, the foundry’s success was short lived. By 1847 the timber and bog ore resources ran out. Van Norman left Normandale in 1859 and moved over 350km away to Marmora where he started another iron-making establishment. This was the end for Van Norman because Marmora ore was more difficult to work with due to its high sulphur content. Normandale couldn’t compete with the cheaper imported British ore. The harbour was too small for larger fishing boats and without the peat bogs and timber, the village’s lifelines expired.

Nothing is left of the Van Norman Company other than slag fragments, by-products of iron production, found in the river. Mill Lane, where the foundry once stood, is now a tree-filled area, visible on the screenshot of Google Maps. You can understand why Normandale has been dubbed a ghost town.

Due to the foundry’s importance as one of Upper Canada’s first industrial businesses, the village was designated a National Historic Site in 1927. The only marker of the building is a Historic Sites and Monuments Board of Canada plaque, west of Potter’s Creek.

Normandale is a quiet place for cottagers and the odd resident to enjoy the slow life. Cars can drive down Mill Street and find a trail that leads to a small beach. Two well-kept historic buildings, the Union Hotel (1840s) and the original Post Office (1842) still stand at the main intersection of Normandale Road and Main Street.

Normandale is located 5km northeast of Turkey Point. When visiting the Union Hotel and the neighbouring Post Office, there is “street parking” available. I did not see public toilets anywhere in Normandale, though if you do, please let me know so I can include that information! Make sure to bring your own water and snacks, or head to Turkey Point’s Sandbar on the Beach for the most fantastic burger of your life.

The Normandale ghost town marks stop #9 on my mission to visit Ron Brown’s 160 unusual things to see in Ontario. Next up is the haunted former Oxford County Jail, with a chilling past you won’t be able to shake. If you’re on Instagram, hop on over to follow along. To check out the first adventure in the series, visit the blog post on Waterloo’s Pioneer Memorial Tower. For more Unusual Adventures, check out this article on a church made of cobblestones and a nearby video rental and ice cream shop! Happy reading, fellow adventurers! 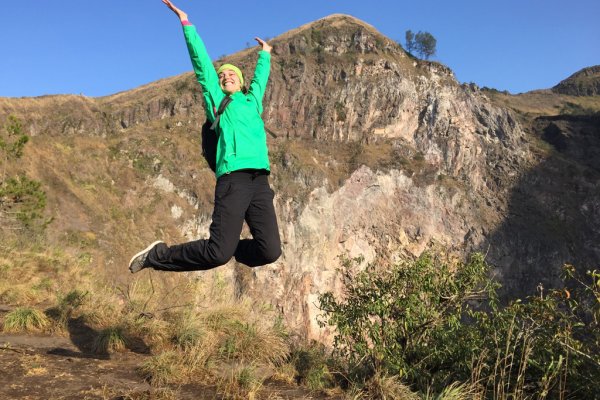 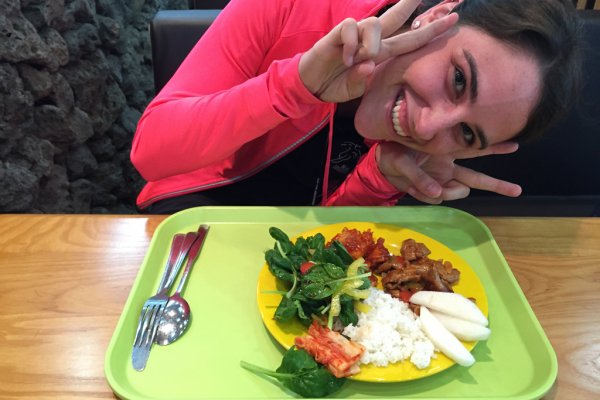